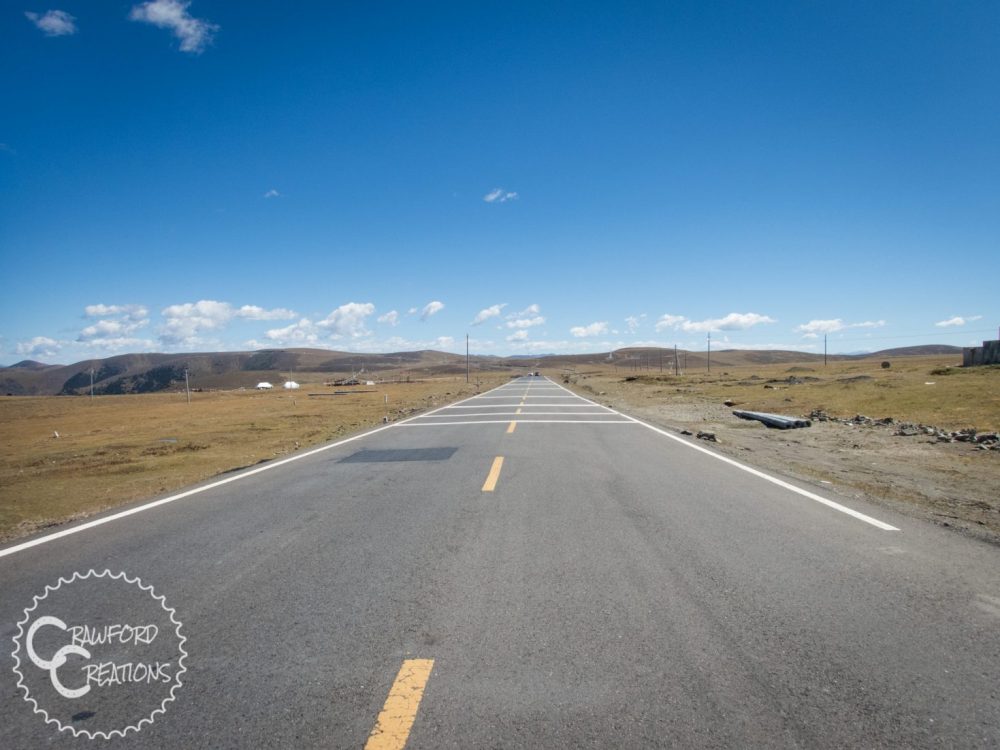 Lijiang to Chengdu by Tandem Bicycle Part 4: Riding in the Grasslands

To say we woke up stiff and sore would be an understatement.  We quickly realized that riding, and especially climbing, on a bike at above 4000 meters of elevation takes a lot out of us.  Our bodies simply don’t recover very well when there’s no oxygen.  We pretty much anticipated feeling like crap after the epicness of cresting 4680 meters yesterday, so thankfully we had an easy day ahead of us, well, as easy as 50 km can get at above 4000 meters.  With mostly downhill terrain we made it to Litang, “The World’s First High City” as it is abundantly advertised, after just a couple hours of riding.

Combine Tibetan heritage with the Chinese penchant for building cities and you’ve got Litang, a one of a kind city located on a 4100 meter high plateau in the middle of nowhere.  While you won’t find any skyscrapers here, you will find brilliantly painted sculptures, temples, and monasteries.  As is typical in China, there was a lot of construction going on, but in Litang it’s monks, not construction workers, driving the backhoes.  I kid you not, there are monks driving backhoes.  Come to Litang and see for yourself!  Pretty sure I just created their new slogan, “Litang, home of the backhoe driving monks”.  I don’t know about you guys, but the last thing I expected to see a monk doing was operating heavy machinery, doesn’t really give off the peaceful, “I’m searching for my inner happiness” vibe.

Semi-rested after our easy day in Litang, we awoke to tackle the numerous “rolling” hills (300-400 meter gains in elevation) that stood between us and our descent off the plateau.  Standing next to our massive 1500 meter climbs these 300 meter hills looked deceivingly easy, and we certainly didn’t give the altitude enough credit for how powerful of a factor it was in slowing us down.

The scenery on the plateau was a stark contrast to the dramatic snow capped mountains, and lush grassland carved with streams from the day before.  The hills were a dry, grassy landscape, creating a feeling of vast emptiness, the kind where you could go for miles completely unaware that you had moved at all, the only life a few cows dotting the hillside.  Cars, of course, would still pass us by as we journeyed slowly over the many peaks before us, a total of six, as we counted on the map.

We stopped at a roadside pull-off partway up the fourth climb for some lunch, which consisted of crackers and cookies, and to fill up on water from the spigot.  We also made use of the facilities, two holes in the ground with a tarp around it, one for men and one for women.  For the pleasure of using these holes in the ground we had to pay the creepy old Tibetan lady standing guard 3 rmb per person, about 50 cents.   As we sat down for lunch the old woman seemed a little too interested in the bags on our bike, and Justin was convinced her and her granddaughter were trying to seal from people.  Probably true, although they were clearly waiting for people to leave their belongings unattended.  She wasn’t very good at hiding her intentions though, and I never took my eyes off her for a second, daring her to try and even touch our bike.  I think she got the message pretty clearly and walked off back to her hut.  A few cars, hitchhikers, and fellow cyclists stopped at the pull-off as well to use the restroom, igniting the reappearance of the resident Tibetan, and we watched as she too lingered around her guests, eyeing their belongings.  Like us, nobody left their stuff unattended thus leaving her no opportunity for pillaging.  She really needs to learn how to be a little less obvious.

We chatted with the hitchhikers and cyclists, sharing our journeys and destinations before parting ways and continuing our climb up to peak number four of the day.  The landscape was, once again, changing as we rounded the hill, becoming more forested instead of grassland.  With only two more peaks to go, we were nearing the end of the grasslands.  By now the fatigue was setting in, but we pushed on, wanting to make it over as many peaks as possible today so we could start heading down off the plateau and breathe some oxygen into our lungs again.  Part way up the final peak we stopped at a rest stop and filled up our 10 liter water bag and bottles in preparation for a night in the wilderness.  Not too much farther and we found a nice camping spot in a grassy patch of hilltop off the side of the highway, the black ruins of a fire an indication that this spot had been used recently by fellow travelers.

This was our first camping spot with a view, and it made for a beautiful evening out.  As we were eating dinner, the sound of a passing motorcycle broke through the serenity of the landscape, and then abruptly stopped just down the road from us, the oddity compelling us to look up from our meal.  Our stomachs sank as the motorcycle reversed back to our campsite and a young Tibetan couple came to say hi and look around.  Tired from our grueling day riding over 5 and half mountains at such a high altitude we weren’t exactly in the friendliest of moods for dealing with nosy strangers.

After our hair-raising encounter with the old Tibetan woman this morning, I was especially distrustful of our visitors.  Luckily, these locals were just genuinely curious, and tried to talk to us in their broken Mandarin.  They even gave us some homemade yogurt to eat with our dinner, which wasn’t my taste, but Justin thought it was delicious.  I gave them a few dollars to thank them for the yogurt, and they left us to finish our dinner in peace.

This is the bad part about camping out in the open, but unfortunately the landscape in this part of China doesn’t leave us many options.  I think seeing “rich” white people (in this part of the world all white people are considered rich) camping on the side of the road strikes the locals as odd and intriguing.  The Tibetan people certainly seem to be naturally curious, and know very little in the way of boundaries.  We are certainly out of place here on the Himalayan plateau, but that only makes our journey even more interesting.