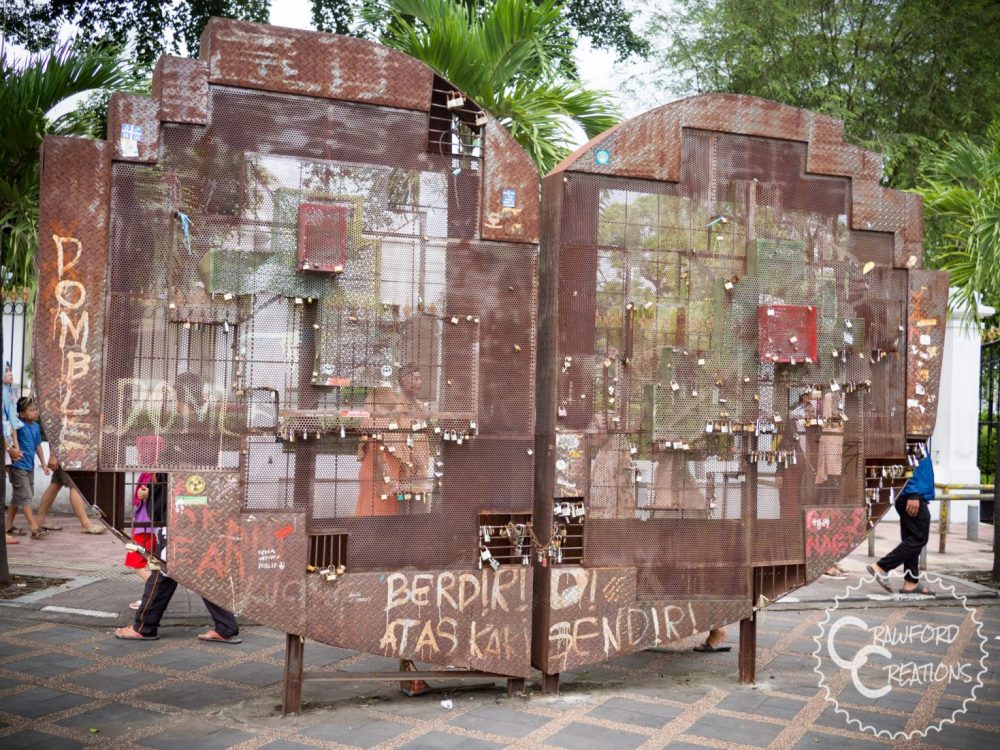 What Indonesia Taught Me About the True Spirit of Islam

Crowds of families mulled around us as we waited in line to get our boarding passes for the domestic flight from Jakarta to Yogyakarta, Indonesia.  My body struggled to stay upright as we queued, the result of a night spent lying on unforgiving metal benches in front of the airport.  While my body fought off the looming exhaustion my eyes were busy taking in the sea of burkas and hijabs mulling around me.  Men in their shorts and T-shirts standing next to their robed wives made for quite the wardrobe contradiction.  With a temperature of over 30 degrees C (80 degrees F) I couldn’t help but think “aren’t they hot under there?”.

Coming from the west where Christianity dominates, but is not outwardly seen (save for the occasional cross necklace) I couldn’t shake the oddity of literally wearing your religion on your back every time you walked out the door.  And I mean really, weren’t they hot?

I am still stuck on the idea of Muslim women wearing so much clothing in a country that is literally on top of the equator.  I mean it literally never cools off here save for the welcome thunderstorms during the rainy season.

We landed in Yogyakarta at 7:00am and hailed a taxi to our hotel.  Immediately after check in we were off in search of breakfast, starving after a sleepless night at the airport.  The receptionist at our hotel used his limited English to point us in the direction of some restaurants where we could feed the rumbling beasts masquerading as our stomachs.

Having absolutely no idea what constituted Indonesian breakfast food, we walked until we spotted an open restaurant filled with people eating what looked to me like some sort of Indonesian style individual breakfast hot pot.  A bowl of broth sat above an open flame at each table, diners alternating spoonfuls of soup with those of rice.

The menu was short, consisting of just a handful of items, but it was all in Indonesian, which I could read but didn’t understand what anything was.  The man at the counter spoke no English so I simply chose the first and cheapest item on the menu and sat at a table to wait for the arrival of my mystery breakfast.

A couple minutes later an English speaking waitress approached to confirm my order.  She told me the drink options and asked if I wanted rice with my meal.  Thankful for her help and clarifications, though still unsure exactly what I ordered, I watched as she brought out my own mini hotpot soup and a plate of rice.

This was my first taste of Indonesian food, and it was delicious (little did I know it would be one of the most delicious meals of the entire trip).  It was also my first of many personal interactions with some of the most kind, friendly strangers I have ever met, who also happened to be Muslim.

Two days before we were to depart Yogyakarta on our tandem to begin snaking our way back to Jakarta, we chose a restaurant for dinner that looked to serve a variety of non-fried food (already sick of the fried cuisine that dominates in Indonesia).  After placing our order we got to talking with our waitress.

The typical questions, “Where are you from?” “How long are you staying in Indonesia?” etc. were asked, and upon learning that we were American she started telling us about some of her family members who have been living in California for 15 years.  They still keep in contact although she hasn’t yet made it to visit them as traveling to, and in, the US is so expensive.  We nodded in agreement that the US is definitely a really expensive country to go to, but despite the expense she told us that she hoped one day she could save up enough money for a trip to California.

We told her about our lives in China, to her complete surprise.  I guess it’s not often that someone says “I’m American, but I live in China”.  We told her we still had one day left in Yogyakarta before moving on, and she immediately set to work putting together a list of things we could in Yogya on our last day.  She really went above and beyond to make sure we had all the information we needed to make the most of our time in her hometown.

It was an awesome list and we had even been to one of the places on it earlier that day, the Sri Getuk waterfall.  She was really encouraging us to go to one of Yogyakarta’s beaches, which, she informed us were “Just as good as Bali’s!”.  We were impressed, but unfortunately, upon further investigation the nice beaches she was referring to were too far away to make a reasonable day trip by bike.

Throughout our time in Indonesia we had many encounters with the locals who were nothing less than friendly, and always happy to help if they could.  We smiled, waved, talked, and took selfies together (the Indonesians love their selfies) never once feeling anything but genuine kindness and happiness in our interactions.

To be honest I didn’t really know what to expect upon arriving in Indonesia.  As an American, the media doesn’t paint a pretty picture of Islam, and wrongly judges millions of individuals by the actions of a few.  While I chose to believe that the majority of Muslims were kind, peaceful souls, I didn’t have any previous personal encounters or experience to back that up. I also knew that likewise, the media of some Muslim countries doesn’t paint a pretty picture of the west, and I was unsure as to how they would perceive us.

Before leaving for Indonesia I did a lot of research, not just on places to see, but also on how to dress as a woman traveling to a Muslim country, and about half of the articles I found recommended that women dress conservatively, even suggesting that we wear clothing that covers our shoulders and knees.  As I looked through my closet packing for our trip I realized I had literally no clothes suitable for hot weather that fulfilled these requirements.

Refusing to buy new clothes for the trip, I hiked in short athletic shorts, swam in a bikini, and wore a dress with spaghetti straps, and guess what, no one cared!  I got not one sideways glance, no stares, and was certainly not judged for my appearance or the fact that I was obviously not a Muslim.  We treated each other as equals and each had nothing but smiles in return.

Indonesia has one of the most kind and accepting cultures I have ever experienced.  Not once during our (entirely too short) 2 week trip did we ever feel unsafe or judged in any way (we definitely can’t say that about China – the judged part anyway).

In the current atmosphere of my home country where so much fear and hatred has been directed towards Muslims as of late, it was refreshing for my own first experience with Muslim people to be one of such kindness and compassion.  Islam cannot be defined by its extremist groups, and its believers can’t be either.  If Indonesia taught me anything it’s that the true spirit of Islam is one of peace, kindness, and acceptance of all people, everywhere.