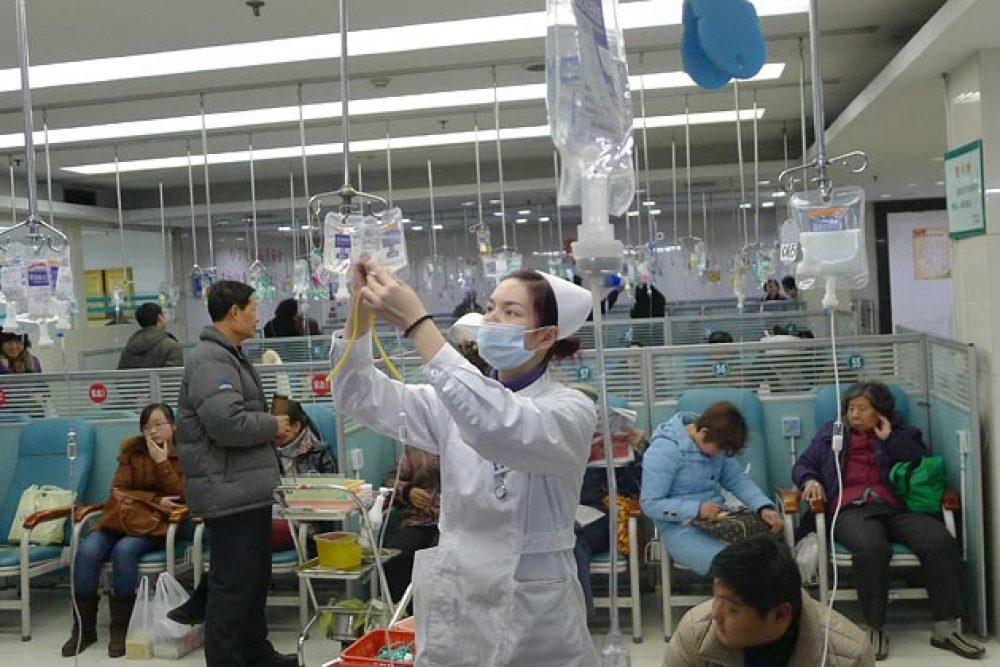 Foreign Illness in a Foreign City: Experiencing the “Best” Hospital in Chengdu

We have officially had our first visitor from the U.S.!  My friend arrived mid-January, and after a few days getting over jetlag, dealing with sickness, and exploring some local sights around Zhuhai, we set off to explore the city of Chengdu in Sichuan province.  She had, unfortunately, brought a sickness with her from the U.S., which after enduring the stress of travel and many long plane rides crammed like sardines with other hacking and spitting Chinese, had turned into quite the nasty bug.  Our plane ride to Chengdu was just enough to push her over the edge, and we were forced to find a doctor immediately after arriving at our hostel.

We asked the receptionist what was a good hospital to go to (there are really no such places as doctors offices in China, even for a cold the Chinese just go to the hospital), and received a rather perplexed look.  That is certainly not the normal question travelers ask, and trust me, I wish we didn’t have to ask it, as spending our vacation at the doctor’s was not either of our ideas of fun.  Clearly not prepared on how to deal with two foreign girls trying to get to a hospital, she called around and presented us with two options and the caveat that “they might not treat foreigners”, and, “I don’t know if any of the doctors speak English”.  “Great,” I thought, although the idea that the hospital would refuse to treat foreigners sounded quite far fetched to me, as I know for a fact all the hospitals in Zhuhai treat us wai guo ren (foreigners) all the time, and Chengdu is a much bigger more established city than Zhuhai.  The no English part I could handle, the rest we would just take it as it comes.  The receptionist gave me the name of the hospital, Huaxi yiyuan, which she said was the best hospital in Sichuan, and off we went in a taxi.

The taxi dropped us off outside the hospital in, what turned out to be, the correct location, a rarity in Chengdu as we would soon come to find out. We walked through the gate into a courtyard and looked around until we found a sign for “Emergency Department”.  The fact that the signs were in English was promising, but still, I was not holding out much hope for any actual spoken English as of yet.  We walked up to the nurses’ booth and I told them in Chinese that my friend needed to see a doctor.  The nurse walked us through the door to a doctor sitting inside.  I described her symptoms in Chinese (she had what we self diagnosed as tonsillitis) and he asked her to open her mouth, looked inside with a flashlight and said “infection” in English.  I was thoroughly shocked to hear him speak English, but as it turned out, he could actually speak English fairly well, especially medical terms, which was good as that’s what my Chinese vocabulary was lacking.

He asked us if we had time for an injection of antibiotics and immediately started writing out a prescription, all of this, of course without taking any of her vitals, a throat swab, or taking down any of her medical information.  Luckily, I mentioned to the doctor that my friend was allergic to penicillin, to the reaction of “Oh, let me make some changes then” at which point my friend and I exchanged the same looks of “oh geez”.  Once the prescription was written we were then escorted over to the accounting window, where we had to pay for the treatment before it was given.  After accounting, our next stop was the hospital pharmacy where we picked up the IV bags (by “injection” they actually meant IV) and then were escorted to the injection room where the nurse administered a 2 hour course of IV antibiotics.

While the bag was only half a liter in volume, the nurses left a tiny butterfly needle in the back of all the patients’ hands, instead of actually inserting a catheter, so the drip went painstakingly slow for both of us, and was made even slower by the fact that the room we were in was minimally heated with an outside temperature of around freezing, which meant the room was maybe about 45 degrees F (and this is inside the hospital).  This was certainly nothing like a U.S. hospital, and felt very third world as we sat there shivering in the most uncomfortable chairs, my friend, with a needle sticking into her hand for 2 hours.  The nurses wore no gloves, but they did sanitize their hands, yet would then proceed to open drawers bare handed and then treat patients without re-sanitizing, which, having an animal science and research background, just blew my mind (you are no longer sterile for gosh sakes!) but I have to give it to them, they got the job done, and they got it done quickly.  They sent us right in to see the doctor, and Jess got treated right away, no wait at all… if only that would happen in the U.S.!