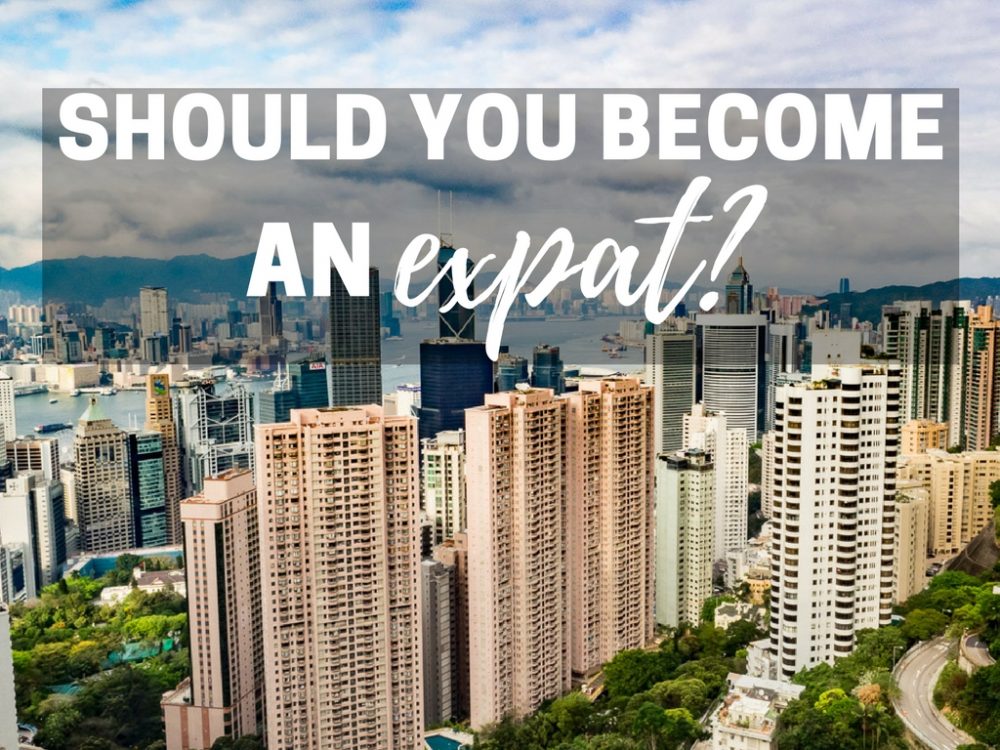 Should You Become an Expat? How to Decide if Moving Abroad is the Right Decision for You

According to Wikipedia, an expatriate or expat for short “is a person temporarily or permanently residing in a country other than that of their citizenship…the term often refers to professionals or skilled workers sent abroad by their employers…[but] is also used for retirees and others who have chosen to live outside their native country.”

Happiness is a mindset. One of Justin’s bosses has this saying which, to paraphrase, basically goes “You can choose to be happy in the worst place or miserable in the best.”

It’s good advice, especially if you or your spouse is thinking about taking a job overseas. The old adage that “location is key” couldn’t be further from the truth when it comes to deciding whether or not moving abroad is the right decision for you.

Let me say that one more time, the country doesn’t matter. This might seem like really odd advice, but I promise it’s true. Unless you’re in the military (is that a company?), no company is going to send you to live in a war zone. As long as you’re safe, nothing else about the country matters in your decision making process.

Your mindset. This part requires a bit of self-reflection.

Are you open-minded and adaptable or would you like to become more so?

Living in a foreign country means being exposed to a lot of different, and often confusing things. Even simple tasks like going grocery shopping can become complicated when you don’t know the system of how things work in a different culture. There is no right or wrong path when it comes to accomplishing tasks. If you’re aware of and can accept these differences, and are willing to learn a different way of doing things, then you’ll be golden as an expat.

There’s no sugarcoating this one, living abroad is challenging. When you first move, every day will come with a twist. There are new rules to live by, both in society and in law, and often times a rather formidable language barrier to overcome. It’s not always easy, but you’ll learn a lot, about your new country, the world, and yourself in the process.

Do you want to grow and develop as a person?

I can literally feel some of you cringing as you read that question. But before you quit reading, hear me out. I’m not talking about the hippy-dippy “chant mantras to yourself in the mirror every morning about how awesome you are” (if you do, no judgement, whatever motivates you to be your best self is what we’re after) but I’m talking like becoming a stronger, more fearless, more confident, more accepting, kinder human being. Moving abroad is a HUGE opportunity for personal growth, which I firmly believe you are never too old for.

Do you love to travel or have you always wanted to travel the world?

Becoming an expat is such a great way to start traveling the world. You’re living outside of your home country which means you’re automatically closer to a million different places just waiting to be explored based on proximity. For us, moving from the US to China means we now have the opportunity to easily and affordably travel around Asia. It’s not halfway across the world anymore, but right outside our door. Even if your move is not as drastic, you’ll still be in a different location with new easily accessible destinations that you probably never even thought of visiting before.

Are you ok with being away from your family and friends for extended periods of time?

A lot of expats get one trip home a year, but not all of them. Of course, if you’re an expat wife or a teacher, you’ll have the time to go home much more often, and for much longer than the corporate employee, so this won’t be as big of an issue. That being said, if you move halfway across the world and can only go home once a year, are you ok with that? Of course, your family can come visit you and you can video call, chat, or email your friends and family to your heart’s desire, but you’ll only be back in your home country once, maybe twice a year.

Do you want to save and spend more money?

I don’t think anyone in their right mind would answer no to this question. Expat jobs are known to be pretty cush affairs in terms of finances, and it’s true. Most expats I know (including us) get some combination of the following: free or reduced cost housing (in the form of a super nice apartment/house), a raise or “hardship allowance” (aka compensation for the fact that you’re living away from your family in a new and strange environment), airfare home once a year, increased vacation time, and a transportation allowance of some kind (this could mean simply money, your own car, or a private driver).

Basically, whether it’s because of the currency exchange rate of the country you live in (i.e. a European or American living in Southeast Asia can make the same salary they did back home but live like a king in Southeast Asia because cost of living is so cheap) or because of actual monetary compensation and salary raises, most expats, no matter what their job, end up earning and saving a ton of money by living overseas. A good chunk of them spend it as well.

Do you like learning languages, or do you want to learn a new language?

If the idea of learning a new language interests you, PLEASE go live abroad. There is absolutely, without-a-doubt no better way to pick up a language than to be immersed in it. Now, I’m not saying that you’re going to pull a Scott Young and become conversationally fluent in Chinese after 3 months of living in China, but you will have a much easier time picking up a new language when you’re surrounded by native speakers on a daily basis.

Now, if you’re thinking back to high school going, “man, I hated language class in school, this is definitely not for me”, guess what, me too! Even though I got good grades, I always thought Spanish class was boring as hell in high school. But guess what, actually living in the country whose language you’re learning makes the process way more fun! The problem with learning a foreign language in a country where nobody speaks that language is that one, you have no incentive to learn, and two, there’s no way for you to ever speak and practice the language. Bore me now.

When you’re living abroad and studying the language, however, you hear it and see it every day, you can practice it every day, and you can use to your advantage like to it buy things, negotiate with people, make friends, actually be able to explain yourself to someone, ask questions, and you know, live your life, with one less barrier. Plus you get the added awesomeness of seeing the surprise on people’s faces when you can actually communicate with them in their native tongue.

Are you looking for a change or new adventure?

If you’re at a crossroads in your life, feeling bored or like it’s time to shake things up and move on to a new opportunity then this could be the perfect time to become an expat. Of course, your change or adventure doesn’t have to be as drastic as moving to a different country, but if this is something you’re interested in, or if the opportunity has presented itself to you, there’s no better time than now to take it.

This wasn’t the case for Justin but was one of the major reasons I agreed to move to China for his job. I got my undergraduate degree and had been working for a year whilst applying to graduate schools, planning to go back and get my masters degree the following year. During this time Justin was notified that there were expat positions open at a new location in China and his company was looking for people to move to Zhuhai.

Never in my life did I ever have any desire to live or even visit China, but there would also probably never be a more opportune time in our lives to move halfway across the world. Taking an expat job is a bit like deciding when to have your first child. There is no perfect time, if you’re looking for a change or new adventure, you just have to go for it.

Do you want to live your life with no regrets?

If you’re the type of person that always wonders “what if?” and will brood over all the awesome maybes that could have happened had you taken that expat job in x-y-z country, then just take it. Sign the contract, make the decision, and move. The worst that happens is you decide you hate it, break the contract, and move back home. You literally have nothing to lose. The opportunities lost will kill you more than those taken.

It’s ok to be scared. We all were when we first became an expat. Being scared, and doing it anyway is the real definition of fearlessness. Be fearless and don’t let life pass you by while you’re playing it safe. I promise you won’t regret it. 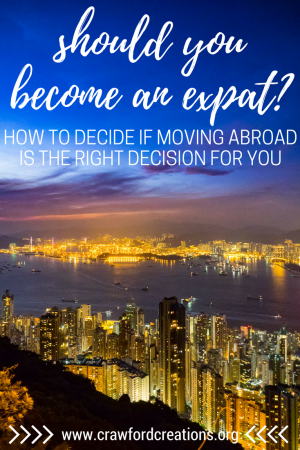